One day at a time and we have reached the twenty-fifth post in the 31 Days of SSIS.   If you enjoy this post, take a look at other posts in this series.  They can be found through the introductory post.

Unfortunately, there were two big problems with this solution.  First, maintaining the archival process was a bear.  It contained a combination of data in tables, hard-coded configurations in scripts, and extended properties that were required and undocumented.  Second, troubleshooting issues was near impossible.  Since it was difficult to maintain it was easy for things to get missed.  There were also many situations where transactions were started and not committed.  Error handling was sporadically implemented and messages that described any issues were lacking.

Shortly after becoming aware of this situation, I proposed a change in direction from the existing solution to a solution centered on SSIS.  The idea was that instead of scripts with thousands of lines of T-SQL, an SSIS package or two could move the data from the production to the archive server.  On this server, a generic merge statement could be used to import the new and updated records.  The idea was to have some common components that would generically load everything.

One of the major requirements for this was the need to be able to archive data from any number of tables.  Initially, the process would cover a couple hundred tables.  Over time, though, it might need to archive those plus a few hundred more tables.  The solution had to be robust enough that it could expand at any time with minimal configuration.

An immediate issue that came up with architecting this solution was that Data Flows in SSIS are strongly typed.  If they are configured for there to be 10 columns that are all integer data-types; then that is what they are.  There is not capacity to change them at run-time.  For this reason, consideration of the use of Data Flow tasks was removed as a part of the solution.

Instead, I opted to turn to a couple technologies that have been around SQL Server for quite some time.  These are BCP and BULK INSERT.  While SSIS is relatively new, BCP and BULK INSERT have been around for a while.  Their age, though, should not be held against them when designing solutions.  In the end, we need a solution.  Not something built on the latest and greatest.  With these two technologies in hand, the SSIS package can be built.

The overall idea will be to take a list of tables that need archived.  This can be stored in a table, based on extended properties, or tied into the implementation of other features (such as CHANGETRACKING or Change Data Capture).  However you obtain the list of tables, the point is the need for a list that can be placed into a record set.

After that, the list of tables will be used to iterated through with a ForEach Loop.  With each table in the loop, the SSIS package will BCP out the data from the table in one database to a file.  The file will then imported into the archive database using BULK INSERT.

The last step will be to merge the data imported into the existing tables in the archive database.  For the purposes of this demonstration we’ll have a place holder for this but no logic to manage it. 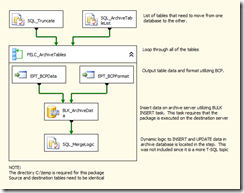 Differing from most other SSIS packages, all of the work in this package will occur in the Control Flow.  As discussed above, the control flow will obtain a list of tables.  It will then iterate through each of the tables.  In each iteration, the package will BCP out the data needed.  After which the package will import the data into archive tables.

There are a number of tasks in the control flow that are needed to implement this solution.  Those tasks are:

There are a number of variables in the package to help control how everything is processed.

The variables from above were added for the following purposes:

Part of what makes this package work is the use of the BCP utility.  In order for the BCP utility to operate, the arguments for BCP.exe need to change per iteration.  The expressions below control this behavior.

This should have been expected.  There are no data flows in this SSIS package.

There are a number of items that would be included in this solution to flush it out completely.  For brevity, I’ve focused this post on the use of BCP and BULK INSERT.  Some of the things that were either glanced over or not mentioned are:

What do you think of this solution?  It’s honestly one of my favorite designs since I was able to accomplish something I initially thought might not be possible.